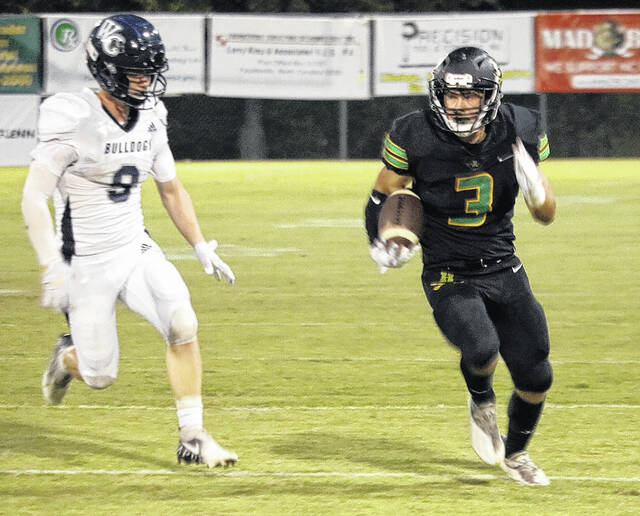 In a previous game, Sam Hope turns the corner on the outside and picks up big yards on a run.

The Harrells Christian Crusaders football team experienced something on Friday night that they hadn’y yet up until that point: a loss. Matching up against the Charlotte Christian Knights, a tied game at halftime turned into a comfortable 28-7 victory for the visitors as they ran away with victory to hand HCA their first loss of the season.

Penalties were the story of the first quarter between Harrells and Charlotte. Numerous false starts threw sand in the tires of both teams’ offenses As neither could gain any traction.

The Crusaders opening drive got down to midfield when a second & 15 proved too much to overcome. Similarly, the Knights had a good first drive going, getting to the Harrells 30-yard line before a false start upended it all and ended with a turnover on downs.

These setbacks left the game scoreless as the first quarter came to a close.

Goose eggs on the scoreboard did not last much longer, however. On their first drive of the second, the Knights went to the ground game and found much success, eventually making it to their opponent’s 20-yard line. There on first down, Kyron Jones broke free for a touchdown. CCHS also converted the PAT, making 7-0 in the early going of the second quarter.

Trailing 7-0, HCA began their next drive at their own 29-yard line, looking to respond. Another penalty put the Crusaders behind the sticks, but on third and long quarterback Ethan Spell found Devin Gardner for a 19-yard reception. This ignited the Harrells offense, who subsequently converted on fourth down and utilized Gardner’s legs for a rushing touchdown and a 7-7 tie, with two minutes to go before halftime.

In a two minute situation, Charlotte was moving the ball in chunks. The Knights got down to the HCA 33-yard line, but only a few ticks were left on the clock. Electing to go for the field goal, the kick sailed just to the right, leaving Harrells and Charlotte tied at 7-7 at the break.

Out of the break, the Knights got the ball to start the second half. Things went awry quickly for Charlotte when a fumble was recovered by Gardner to halt the Charlotte drive in its tracks. The turnover could not be turned into points, however, as things remained stalled at 7-7.

The unchanging second half score persisted until the Knights went 62 yards in just four plays with two minutes left in the third quarter for Charlotte’s first score since the early goings of the second quarter.

This was only a preview of things to come. The Knights scored twice more on 29 and 36 yard receiving touchdowns to complete a 21-0 run that downed Harrells, 28-7.

Statistically for the Crusaders, Gardner had 30 rushes for 103 yards. Charlotte, on the other hand, was dominant in the air attack, completing 13 of 17 passes for 215 yards and two touchdowns.

With their loss, the Crusaders are now 6-1 overall and 2-0 in their conference. This upcoming Friday’s game was cancelled due to COVID precautions with the opponent. Following the week off, Harrells will host Ravenscroft and look to get back into the win column for homecoming and senior night on October 22. Kickoff is slated for 7:00p.