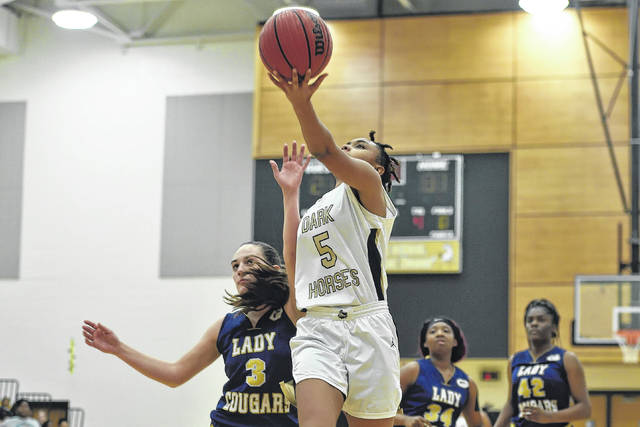 Clinton’s Dekyla Moore dribbles through traffic after snagging a second half rebound. - 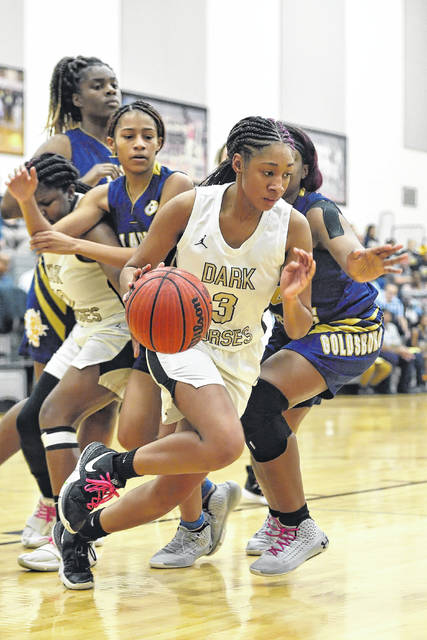 Isa Banks scores a Dark Horse basket on a second half break away. -

The home team Lady Horses got in front of the Lady Cougars early. Once again led by Isa Banks on both sides of the ball, Clinton opened the game with tough defense and an offense that created opportunities when the defense gave it to them. Goldsboro found themselves trailing 14-6 at the end of quarter one.

Clinton continued to have the advantage through the next two quarters. Leading by nine, 26-17, at the half, the Lady Horses achieved their largest lead of the game in the third.

Not able to keep up on the boards, Goldsboro was running for their lives as they eventually trailed by 1. Going into the final period, though, things somewhat changed for Goldsboro.

While the outcome wasn’t much in doubt, the Lady Cougars did make the final score under double digits, 51-42.

Banks was the leader for Clinton. Tallying 25 points and nine defensive rebounds, she was the heartthrob on both offense and defense for the Lady Horses. Khaliah Chestnutt also had a good night with 12 points, four assists, and five rebounds.

Now at 15-6 overall and 9-2 in league play, the Lady Horses were to conclude the regular season with a trip to Raider country, meeting rival Midway on Thursday