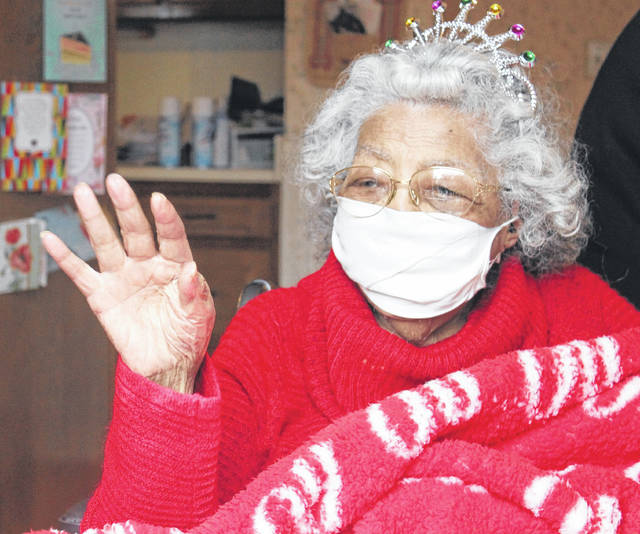 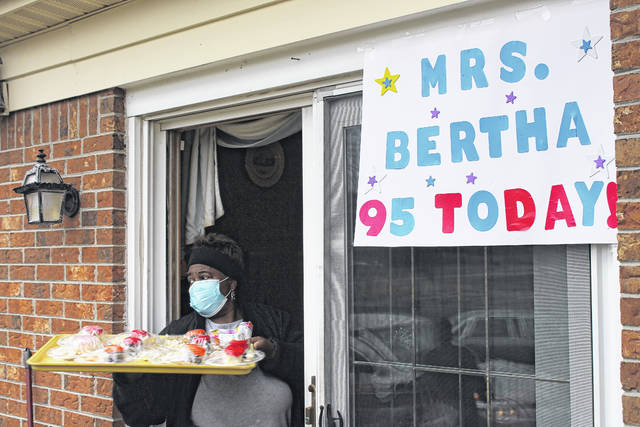 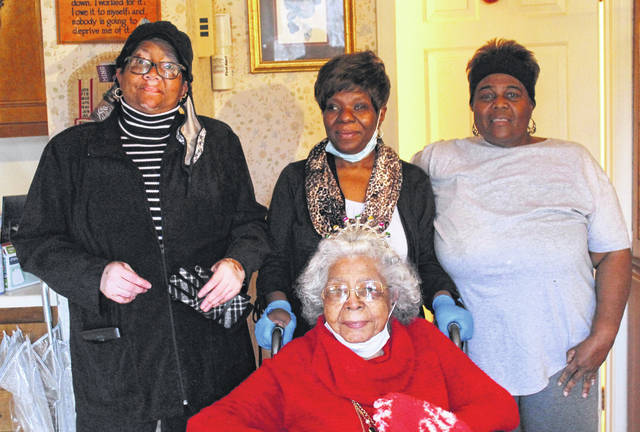 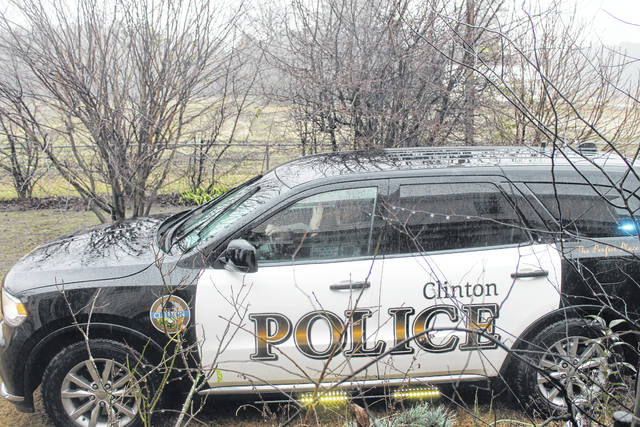 An officer from the Clinton Police Department greets Bertha Johnson Armstrong on her birthday. 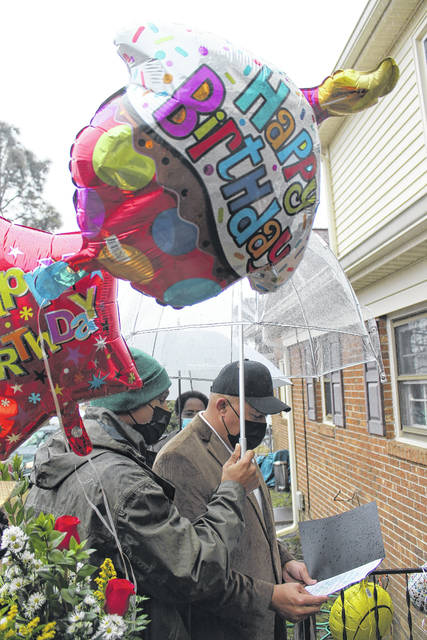 On behalf of the City of Clinton, Mayor Pro Tem the Rev. Marcus Becton reads a certificate of recognition for the 95th birthday of Bertha Johnson Armstrong. Also pictured is the Rev. Leonard Henry, and Lenzie Grice of First Baptist Church, 900 College St.

While wearing a tiara, Bertha Johnson Armstrong waved at cars with smiling drivers as they went through her backyard.

It was a rainy day, but the weather didn’t damper the spirit of Armstrong and supporters who brought flowers and balloons to her porch. Armstrong recently celebrated her 95th birthday with community members, city officials, and fellow members of First Baptist Church.

“I just thank God for being here,” Armstrong said while covered under a blanket. “It’s wonderful.”

On behalf of Clinton Mayor Lew Starling, Mayor Pro Tem the Rev. Marcus Becton read a certificate of recognition titled “An Angel On Earth.” The resolution read that Monday marked the “95th birthday of this outstanding woman and living legacy of Clinton, Sampson County, North Carolina.”

“Now, therefore, I Lew Starling, Mayor of the City of Clinton do hereby extend this expression of our esteem and congratulations on this momentous occasion to: Mrs. Bertha Johnson Armstrong.”

Armstrong was born Jan. 25, 1926 in Garland to the late Edward and Sarah Johnson. Her mother was known as a renowned midwife. Armstrong went to Garland High School and continued her education at Deshazor’s Beauty College in Durham. She earned a license from the State of North Carolina as a certified beautician. As an entrepreneur for more than 60 years, she trained many beauticians to earn certifications. She was married to the late William H. Armstrong, a native of South Carolina.

A portion of the resolution also stated that she is also blessed with five nieces and four nephews who she loves dearly.

“For someone of her age, I think she doing great,” her cousin Marilyn Hand said. “She still has her mind and makes her own decisions and she keeps up with her own money.”

Patricia Cooper, Armstrong’s cousin and caregiver, passed out cupcakes to participants of the birthday parade.

“It’s always a pleasure because she can remember everything,” Cooper said. “She can recite a poem that she learned as a little girl — and that was over 80 years ago. Just to see it with her and be in her presence is a blessing to me.”

As a member of First Baptist Church of 900 College St. in Clinton, Armstrong served in many positions before having health issues. Some of those positions included being a choir member, usher, Sunday School teacher, on the kitchen committee, as a missionary and a silent workers’ member. Armstrong’s favorite scripture from the Bible is Psalm 23 and her most loved hymn is “Amazing Grace.”

“We’re just happy to be able to share in her 95th birthday celebration,” her niece, the Rev. Judy Johnson-Truitt said. “She’s the matriarch of our family and we certainly appreciate all that she has done throughout the years for all of us. She’s been like a big mom to everybody and we appreciate her. We love her and we’ll do anything for her.”