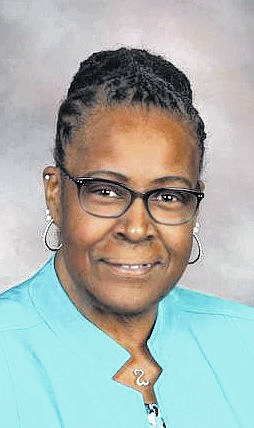 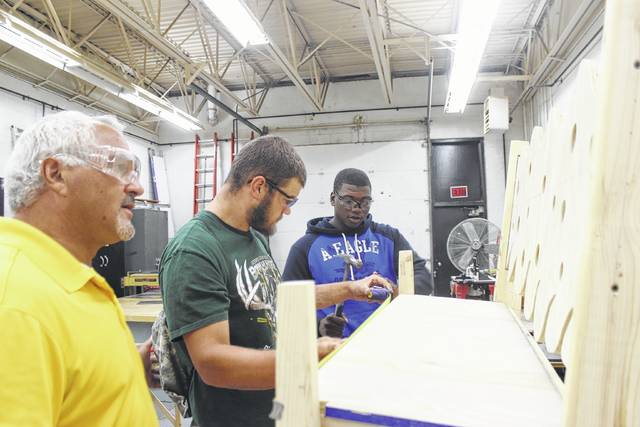 Teacher David Locklear works with students at Lakewood High School, one of the many high schools in Sampson County whose re-entry is being mulled by administrators.

For Sampson County Schools, Interim Superintendent Dr. Stewart Hobbs is asking the Board of Education for flexibility on plans for all high schoolers to return next year.

If COVID-19 conditions improve when the 2020-2021 academic year continues in early January after the holiday break, administrators are looking at a schedule with different groups of students going to classes for two days, back-to-back, each week. When they’re not in class, education will continue at home through remote learning.

“I think you have to be flexible at this time to do everything that you can in the best interest of the students and the teachers and making sure you’re keeping everybody safe,” Hobbs said.

Due to spacing and social distancing measures, Midway High School is the only school that can’t return to the two-day schedule, known as Plan B. Hobbs said the district wants to be consistent and is planning to meet with principals this week on the matter. Another option for Midway is different groups of students attending one day a week.

Currently in the county system, freshmen are attending school one day a week because educators believe they need instruction for the transition from middle school. After several weeks of students learning virtually at home (Plan C), the return of pre-kindergarten through middle school grades was phased in under Plan B during September and October. Safety measures such as wearing face masks and social distancing were implemented for students, staff and teachers.

Board member Kim Schmidlin made a suggestion for officials to consider a schedule of student groups going for five consecutive days a week on a three-week rotation for Midway.

“It gives them a lot more time in the classroom, and every day up to this point counts,” Schmidlin said.

With this idea, board chair Sonya Powell is concerned about more stress on teachers having to spend time with students who decide to stay with virtual learning. Schmidlin said lessons can be streamed or recorded, but Powell feels that it won’t work. Some of the reasons are possible incidents in the classroom with students and timing to edit recorded materials.

“I’m not saying that it’s easy, but we need to find a way to get these kids back in the classroom,” Schmidlin said.

Speaking from personal experience as an educator, Powell said it’s something easier said than done.

“Right now, I’m in a classroom setting where I have students who come to my class and students who don’t come into my class,” Powell said. “It’s almost impossible for me to teach three different groups of kids at one time. Heaven forbid that I would be trying to do more than that and trying to actually record.”

As the pandemic continues, Powell added that there’s going to be a contingent of students with parents not allowing them to attend school since there’s a remote virtual option available. Powell said they need the same level of education as the others. She also brought up the possibility of uneven class numbers between the Midway District and others in Sampson County Schools.

“We have to consider that,” Powell said. “You’re talking about a teacher having three or four kids in a classroom, five days a week, then you have another 15 that aren’t in a classroom. That gets to be a really hard chore for a teacher in a classroom setting and I’m speaking from experience.”

Belva Lovitt, director of technology, talked about teachers being able to record and do synchronous learning, live streaming for lower grade levels.

“But we haven’t had high school on,” she said. “We think we’re robust … but there’s days stuff goes down.”

Powell expressed her thoughts about schools being the same to benefit students. One example was a student moving from one area of Sampson County to another school.

“I would have to have a really strong persuasion to see why that would change right now,” she said.

Hobbs continued to address how COVID-19 is continuing to impact local education and students. This comes with making decisions that are different than other years.

“During these times, there has to be some flexibility to make sure that we’re doing the best that we can for every child,” he said.

Sports and determining who should be allowed to play was also brought up again. In a previous meeting, some questioned whether a student should be eligible if they prefer to learn remotely instead of coming to school — if it’s offered to all students next semester.

“I still don’t understand how you can keep your child out of school, but you’re going to let them swap snot and sweat with another kid in a sport,” said board member Robert Burley. “That doesn’t make sense to me.”

Hobbs feels that virtual learning, whether there’s a pandemic or not, is going to be a part of education in the future. He believes the district should explore ways to set up a virtual school.

“It’s here folks and when this is done, you can say what you want to, but there are people out there who are making virtual learning work,” Hobbs said. “There are students who are doing well and that’s going to continue and if you don’t offer it, they’re going to leave.

“Especially with virtual learning,” he continued, “they don’t have to leave and move to another county. They can just sign up for a North Carolina virtual school or all the other virtual schools you’re going to see pop up.”

Earlier during the meeting, he said virtual learning could be an end to “snow days” and not going to school. He felt the same as Burley, but expressed how the virtual option will continue to be a factor.

“I get it, but it’s going to be hard to sit there and tell a parent that you’re going to continue to offer virtual learning, but you’re going to tell my child that they can’t participate,” Hobbs said.

At the moment, Powell said the bigger picture at the moment is students not being eligible because of the virtual learning process being ignored completely.

“That’s what they’re doing this whole semester and a lot of them aren’t bothering to do anything,” Powell said. “They’re just acting as if school isn’t a part of their life right now.”

During the work session, it was reported that 1,142 high school students are failing one or more classes. More than 200 are seniors. Out of that group, 90 are in an English class required for graduation.

“The students are not working on class work,” said Jennifer Daughtry, director of high school education. “Some of them are working their public jobs. Some of them have given up.”

She added there’s also misconceptions that the failing students will get a pass or waiver, although they’re not completing the work.

“It’s just a number of things and you can tell that school is not those students’ priority right now,” Daughtry said.

Hobbs later recommended that all academically eligible students be allowed to join teams, regardless of how they’re learning during the pandemic. He mentioned that restrictions could cause conflicts in other areas as well.

“Not only are we talking about athletics, but if you start doing that, you start getting into band and every other extracurricular activity,” Hobbs said. “I think you’re opening up a can of worms when you go that far.”

Along with high school plans, Hobbs is also planning to have a presentation on elementary students at the next board meeting.

In the fall, a decision was made for elementary schools to remain on Plan B — a mix of students attending school for two days with social distancing practices and spending three days away from the building. Plan A — a five-day, face-to-face instruction format — was an option, but it was turned down by administrators.

The next meeting is scheduled for 7 p.m. Monday, Nov. 23, in the district auditorium, 406 Complex Road, Clinton.