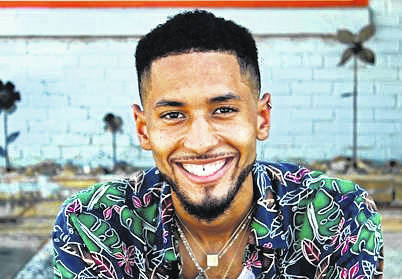 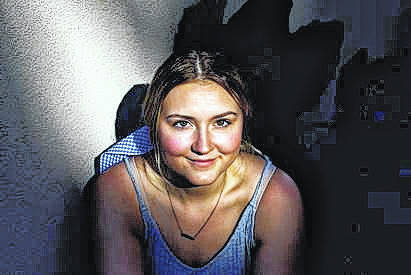 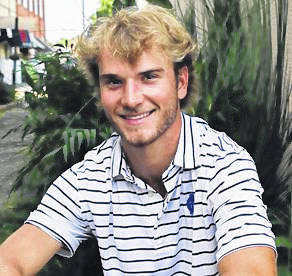 For the summer of 2020, the Clinton Main Street Program has collaborated with local college students who are back in the area for summer break to work on a variety of projects around Downtown Clinton. With three interns and one freelance artist, these young people have been coming up with ways to help attract people to the downtown area.

McLaurin graduated from Hobbton High School in 2017 and is now a rising senior at Howard University in Washington, D.C. with a Major in Graphic Design. He applied to be a Clinton City intern through the Simple Gifts Scholarship Fund which is a financial aid and networking outlet for eligible high school students in Sampson County. This Summer, McLaurin has been using his artistic talents to spruce up some artwork in the D.R.A.W. (Downtown Recycle Art Walk) area downtown. He has painted two murals on backer boards which were hung on Friday, July 17. The first board he created is a tribute to the Native American community of Clinton.

“The mural depicts Mother Nature and reflects the values of the Native American community such as protection and integration of nature and treating our planet and its inhabitants with respect.”

McLaurin chose the concept to “represent and pay homage to the Native American population in Sampson County.” His second mural illustrates the Clinton Millstone with a vibrant background surrounded by flowers.

McLaurin also had the opportunity to paint two additional mural boards which will be part of a second alleyway improvement project and hang on the rear of the Wall Street Barbers building owned by local City Councilman and business owner, Darue Bryant. He uses his barbershop not only to create suave and modern hair cuts, but also as a recording studio named Providnz. Mr. Bryant decided that the back of his building needed some freshening up, and was able to collaborate with the Clinton Main Street Program and intern McLaurin to create murals that represent both sides of his businesses. These art pieces are to be hung up later this Fall as this project progresses.

Morris graduated from Hobbton High School in 2018 and is now a rising junior at Randolph College in Lynchburg, Virginia with a Major in Mathematics and a Minor in Music. She is also an intern through the Simple Gifts Scholarship and has been working on several projects during her time in Clinton this summer. Determined to help downtown businesses who have suffered great losses from COVID-19, Morris looked for ways to help get consumers to shop local. Morris has worked with the Clinton Main Street Program Promotion Committee to actively revamp the Downtown Clinton Instagram account (@downtownclinton). She went around to available downtown businesses and took pictures of their stores/products with a team of models to help promote them in a fresh way. Since first posting, the Instagram gained over 100 followers with increased engagement by over 132%. Along with regular office duties, Morris proposed several ideas to add to the Bark Park on Fisher Drive.

“One of the locations I really wanted to highlight on the Downtown Instagram, was the dog park,” Morris commented. I went out and took dog portraits for some people and realized that our dog park could be such a unique space in Downtown Clinton.”

Morris’ proposal included multiple elements that the dogs will be able to play on, along with memorial trees that can be dedicated to dogs who have passed. Nearly all of the materials needed for this project will be from recycled and repurposed materials to help the environment.

“I am so excited to see what the park will look like once everything is finished,” Morris stated. “I love the Bark Park and hope that dogs and their owners will find it to be an enjoyable experience.”

Simmons graduated from Clinton High School in 2018 and is now a rising junior at Virginia Commonwealth University School of the Arts in Richmond, Virginia. She is majoring in Painting and Printmaking. This Summer, Simmons has been commissioned by the Clinton Main Street Program Design Committee to help with Downtown public art projects. Her biggest project for the summer of 2020 is creating a set of three mirror and glass mosaic 2D sculptures to be located in the memorial tree park behind the Clinton City Market. Materials for the project will be locally sourced and include reused glass/mirror fragments.

“The figures are to represent people in the community and reflect the importance of unique diversity through contemporary art,” Simmons stated.

She will also be creating a mural to replace some of the older art pieces at D.R.A.W. alongside intern McLaurin and will be finishing an abandoned floor mural in the same area.

“It is great to have a community that is open to exploring creative endeavors that push beyond conventional art in small cities meant for the people; all people,” Simmons stated. “It is exciting to have this opportunity at the age of 20, not yet out of school, but already beginning to do the kind of work I love and want to share.”

Sutton graduated from Clinton High School in 2018 and is now a rising junior at the University of Chapel Hill with majors in Public Policy and Religious Studies and a Minor in Urban Studies and Planning. At Chapel Hill, Sutton is involved in the Carolina Athletic Association as the Sports Marketing Chair and is a member of the Student Rams Club Board. Sutton is also part of a men’s Bible study and is active in intramural sports. This summer, Sutton has been hard at work taking photos of buildings in Downtown Clinton to update files used for beautification purposes.

“I’ve always had an interest in local government,” Sutton stated. “Last summer, I had the opportunity to work with the city government in Louisville, Kentucky studying gentrification. I am very grateful to have been able to come back to my hometown and see what it was like to work in the government sector of a smaller city.”

“These college students have been such a pleasure to work with and have each contributed to projects which benefit our Downtown and assist the City with creating and maintaining a vibrant Downtown area,” Planning Director/Main Street Director Mary Rose stated. “Each year we look forward to working with college students who see Downtown from a different perspective and have lots of great ideas as to how to attract young people to Downtown Clinton.”